ATML Pad has the ability to translate data between the formats that are supported natively (ATML and eXpressML) and other data formats. This capability is extensible, with new data formats being continuously added.

Extensibility is achieved through a modular architecture, where data translation can be implemented in separate plug-in modules: 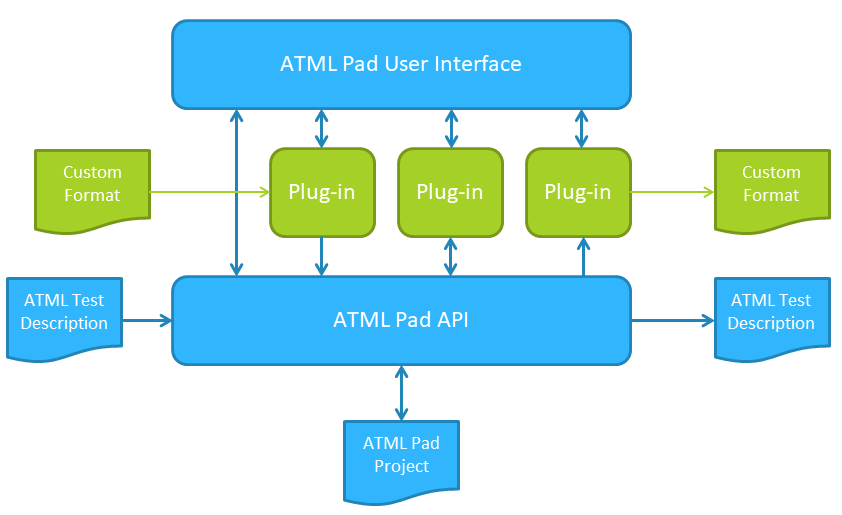 The main characteristics of plugins are :

Reston Software provides state-of-the-art, U.S.-based software development services for developing custom ATML Pad plugins. To accommodate different user requirements regarding IP protection, we offer offer several solutions, depending on the end user’s needs to (1) restrict the use of a plug-in and (2) restrict access to the plug-in source or binary code and to ancillary files:

Reston Software develops plug-in, owns the source code and the binary and handles distribution and licensing.

(*) Due to the limitation of the underlying technology, Reston Software cannot guarantee that licensing will not be circumvented by third parties.

(**) Due to the limitation of the underlying technology, Reston Software cannot guarantee that the binary code will not be successfully reverse engineered by third parties.

Reston Software develops the plug-in. The end-user owns the source code and the binary and handles distribution.

The end-user develops the plug-in, owns the source code and the binary, and handles distribution.

Please contact us through the Support Request form to discuss the development of custom plugins, training, or consulting services.